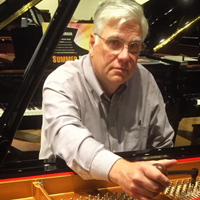 I completed my initial training at the Perkins School of Piano Technology in 1983. That same year I opened Slater’s Piano Service, a retail storefront in Cleveland Hts., Ohio where I sold new and reconditioned pianos. My wife Kathleen managed the store while I began to build an active piano tuning and repair business in the musically rich Cleveland area and surrounding suburbs.

I joined the Piano Technicians Guild in 1984  and passed the written, tuning, and technical exams gaining the designation of Registered Piano Technician in 1988. I have remained an active member in the Cleveland chapter and continued my formal training by participating in local, regional, and national technical seminars. I attended the Comprehensive Service Training at Steinway & Sons in New York on behalf of the Mattlin-Hyde Piano Company.

I have tuned, repaired, and restored pianos for discerning musicians of local and national renown and for piano teachers and students in private homes, as well as for schools, churches, concert venues, radio and television studios, night clubs and recording studios. I have performed warranty service for many well-known manufacturers including Steinway, Yamaha, and Bosendorfer.

My involvement with music extends beyond servicing pianos to building acoustic instruments and playing the mandolin.